For all but fifteen minutes of this game they toiled in trying fashion to score a goal and get both points. There was little question of their dropping both.

The two things which hampered and held them were the frolicsome wind and big Bob Henderson and his henchmen.

In the first half it was mainly the wind. Afterwards it was certainly a brilliant Brockville defence.

As time ticked on, the Dens forwards became minute men. They were obviously aware of every second slipping swiftly by. Balance and brainwork gave way to rushes and rashness.

The game almost took a turn when a low Andrews cross was lifted into the goalmouth by Williams. Gunn rose to the golden opportunity. But his header hit the bar and came down for Nicol to collect on the line.

Wilson nearly headed past his own 'keeper. Follon advanced on his own and had a go from the outside-right position.

But the Dens faithful were beginning to resign themselves with a draw. It looked like Dundee's bolt was shot.

Then came anti-climax. Two minutes, two goals. Boyd and Nicol went up to meet a Gunn corner. Boyd's header was pulled out and quicksilver Jimmy Toner was there to send the ball raging through the ruck of players to the rigging.

An Andrews shot from an acute angle was touched against the bar by Nicol and a Steel-Williams-Toner rush ended with a three in the net with the ball. Toner got the handshakes and became Dens Park's top A League scorer.

Dundee's earlier efforts to probe the stonewall Brockville defence met with little success. Most of the thrills came from half-backs, Gallacher and Boyd. Tommy scored in 21 minutes, but he had mixed his football with handball and the referee saw his slip.

Flashes of sharp Steel cut through the solid rear lines occasionally, But Dundee's darling Billy boy was not at his brilliant best with a light ball in a high wind. He dimmed and disappeared for long periods.

Stan Williams conceded height and weight to Bob Henderson. In the long run he had to give best to the centre-half. But not before he had tried football, speed, wanders to the wings and in the end, bulldozer tactics. But he nearly became the first Dens centre-forward to score this season. Henderson cleared his neat flick from the line.

Alfie Boyd was not at his best either, Follon was star performer. This despite the fact he was opposed by Morrison. Falkirk's most likely-looking forward in an inexperienced-looking line.

Lennon was the smallest Bairn, but he deserves a big word of praise. He has intelligent anticipation plus real guile to offset his lack of inches. 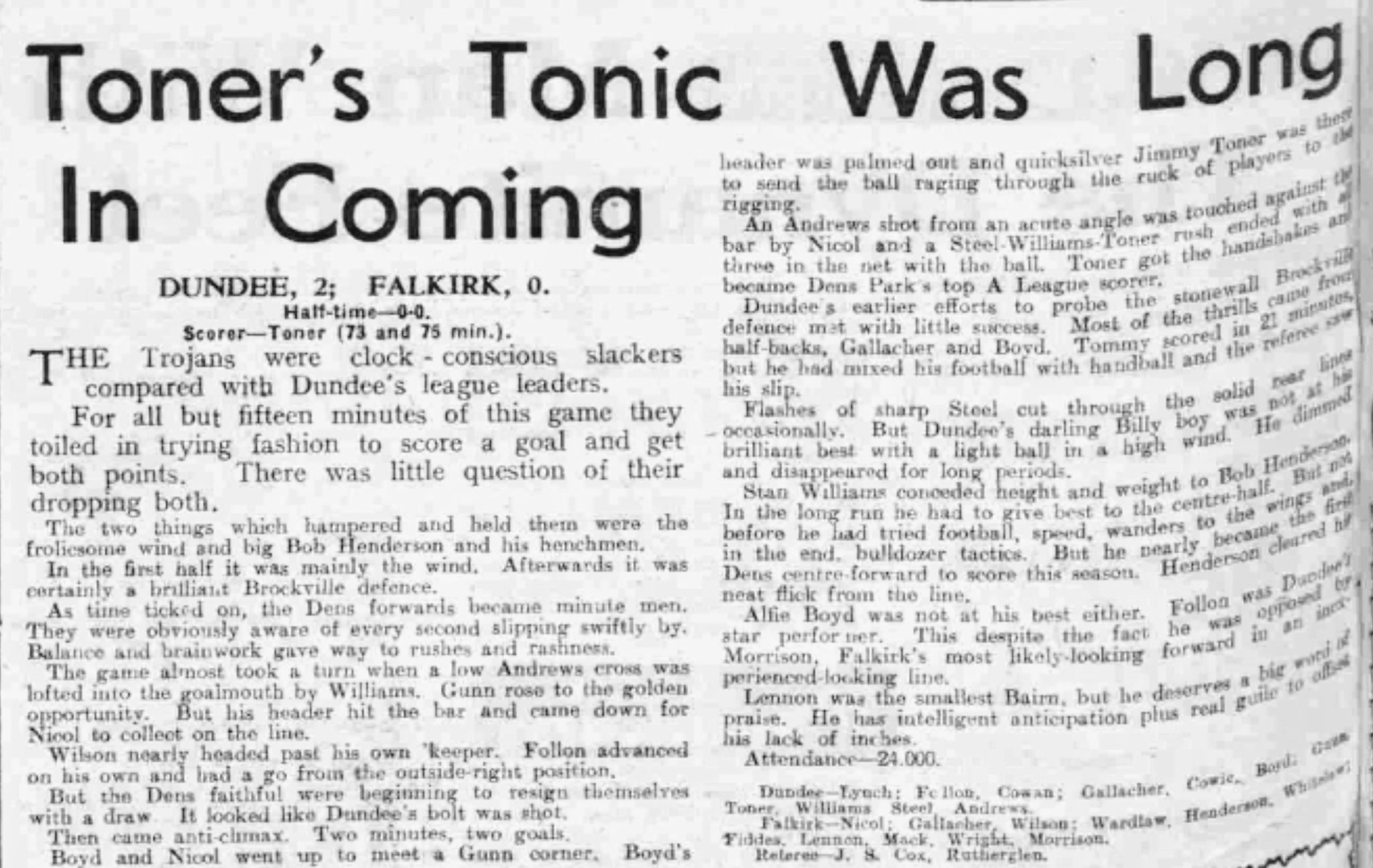