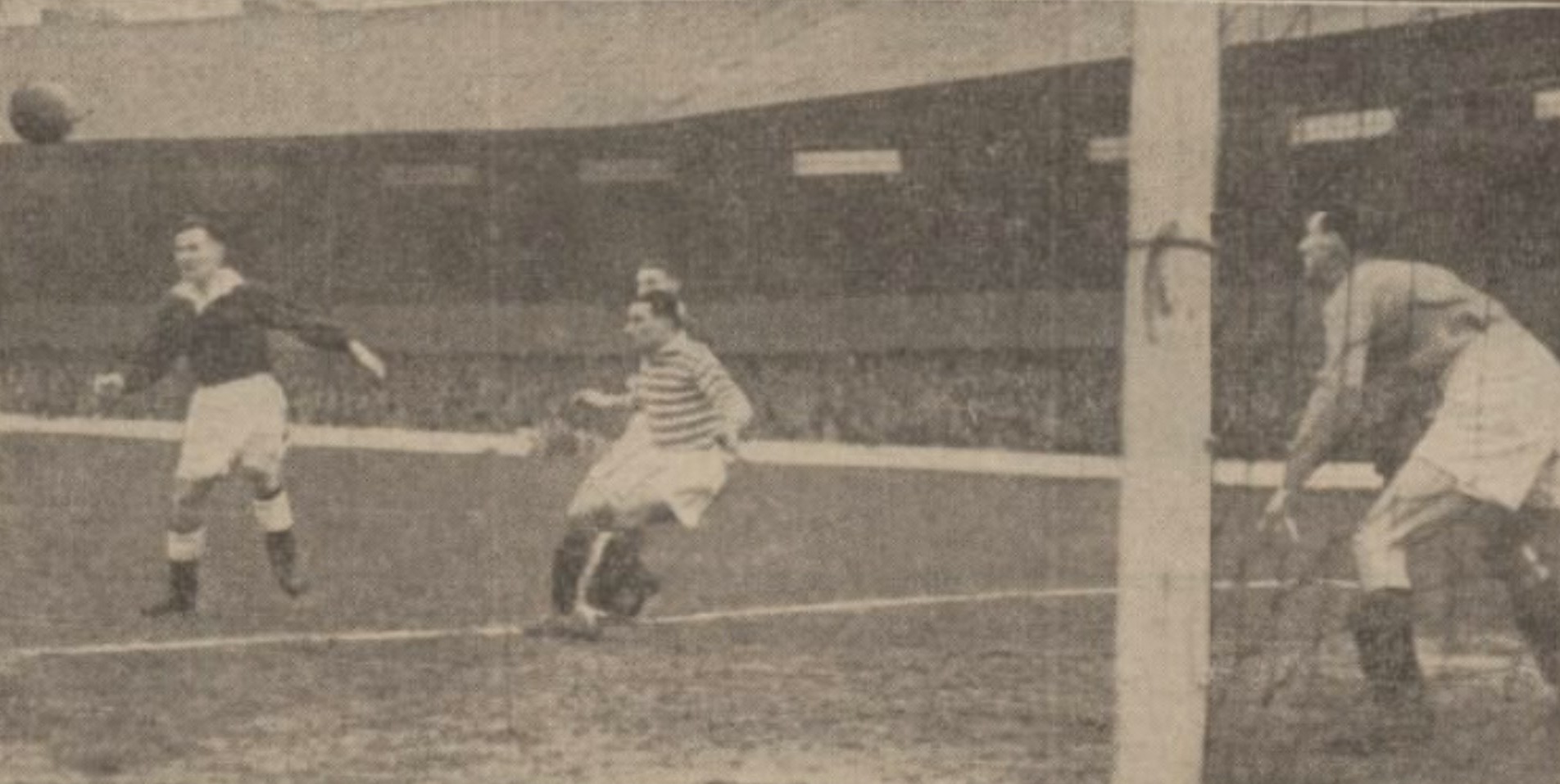 By the time Rangers headed for Dens on Saturday, February 5, 1938, the Dark Blues early season form had slumped to a mid table position If that slump was not worrying enough Dundee had to contend with the fact that eight teams were separated by a few points. Morton were seen as the relegation certainties and it was any one from the other eight to join them.

Rangers were still pushing hard at the top of the table and needed the points to keep in touch with Celtic and Hearts.

It was a vital match for both sides and they entrusted the following men with the task of point gathering.

With the wind at their backs and playing to the T. C. Keay end of the ground, Dundee began well, and they had a good looking penalty claim refused when Coats was brought down in the box.

It wasn't all Dundee, however, and Mains put in an extremely dangerous cross for Rangers which Lynch did well to stop. Dundee were still the game's major attacking force so it was very much against the run of play that Rangers opened the scoring in 18 minutes. Venters and Thornton got away due to some poor marking, allowing the former to shoot past the onrushing Lynch.

Dundee refused to let this misfortune get them down and continued to go about their business in a determined fashion. It paid off in 22 minutes when McKillop brought Coats down in the penalty area. Mr. Craigmyle awarded the home side a spot kick and Baxter stepped up to slot home the equaliser.

This was the start of a purple patch for the Dens Parkers and five minutes later they took the lead. Sneddon got a quick return from a throw in and put Coats away. The centre-forward, controlled the ball, took it in fairly close before scoring from an acute angle.

Dundee were very much in command at this point and in 38 minutes went further ahead. Out near the corner flag Boyd took on and beat a Rangers defender, he then proceeded to put in a tantalising cross, which gave Coats a chance, to glance a header beyond Jenkins.

Two minutes later Coats was in the clear and he despatched a tremendous pass to Boyd. The latter squared the ball to Baxter who waited for the right moment before un leashing a drive from 18 yards. The ball had rebounded off the stanchion inside the net to make it 4-1 before Jenkins could do anything about it.

Not surprisingly the last five minutes saw Rangers panic but Dundee went in 4-1 at half time to rapturous applause.

Rangers emerged in the second half in a grim and determined mood. With the wind advantage they surged forward and even centre half, Simpson was involved in attacks, not the done thing for No 5s in those days. However, Lynch's goal never looked in serious danger.

The game was much more end-to-end stuff now and Dundee's McMenemy had the ball in the net but it was obvious he had used a hand.

Rangers were enjoying their best spell of the game and forced Lynch to make some fine saves. At one point he had to look very speedy to beat Venters to a loose ball. He was ably assisted by Morgan at the heart of the Dundee defence, who was dealing with Harrison and Thornton admirably.

As the match drew to a conclusion it was apparent the home side had weathered the Rangers storm and they began to take control of the game once more.

Baxter and Coats scorned a couple of chances each. The former redeemed himself when he completed his hat-trick with seven minutes to go. A cross from the left was headed onto the post by Coats and the No 8 thumped home the rebound. A minute later and Baxter was 'sinner' again when his penalty was saved after Coats had been upended in the box by Simpson.

In 88 minutes Dundee completed the scoring when a Boyd shot from close range made it 6-1.

So the Dundee fans in the 15,000 crowd went home happy. Despite the fact they had five players appearing that day who had never appeared at Dens before, the Glasgow team had been favourites before the start.

One significant change for Rangers had been the fact regular centre forward Smith had been played on the left wing. The previous October, Smith had scored four goals in Rangers 6-0 drubbing of Dundee.

The Dens Park game was Rangers biggest defeat of the century at that time. It helped put paid to Rangers title hopes that year, but unfortunately for Dundee it did not save them from relegation.

A last day draw at Ayr saw them go down and co-incidentally a 3-2 victory at Ibrox helped fellow strugglers Queen of the South escape.