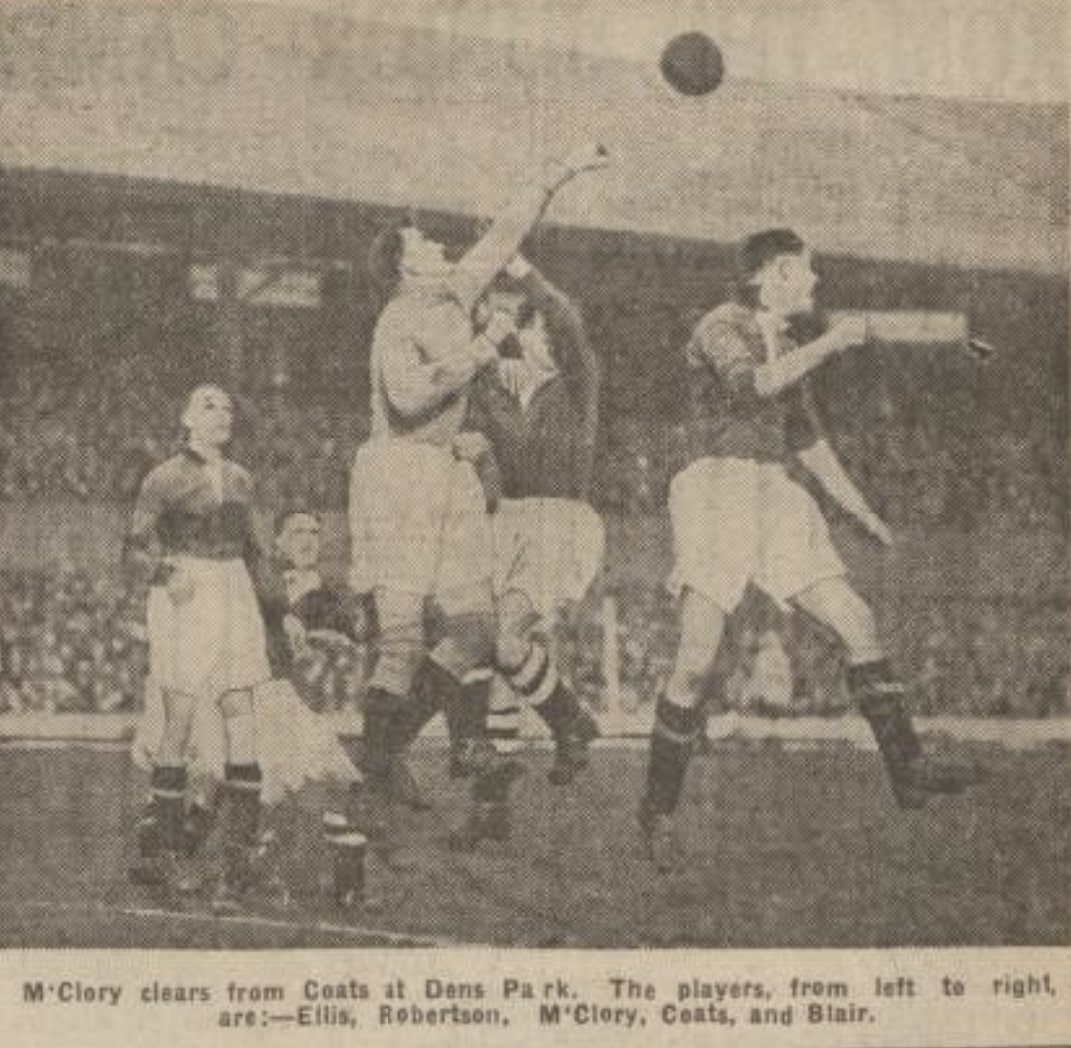 All the tragedy and thrill of a drama were enacted one and a half minutes from the end at Dens Park.

The big crowd that had roared encouragement during Dundee's storming attacks in the second half, were stunned into silence when Bob Ferrier scored an amazing goal, and won the tie for Motherwell.

A goal for Motherwell was the last thing expected. Dundee, with the wind behind them, had battered home attack after attack. They had wiped out Motherwell's lead, and scarcely once had the Lanarkshire forwards reached the Dundee penalty area.

Then came the bombshell. Macfadyen was forced to put the ball out to the left. Morgan was there almost on the bye-line. He should have got that ball away anywhere for safety. He hesitated.

Ferrier bobbed up from nowhere, swung round the backs, and from an almost impossible angle hooked his shot high up into the far-top corner of the net.

The Dundee players stood flabbergasted, They seemed to wonder how the ball had got there. But it was a goal all right and a great one scored by a master of the cross shot.

"Unlucky Dundee! They should have won well, was the burden of the crowd's remarks as they left the ground disconsolate.

But the fact remains the Dark Blues had the chances, and couldn't take them. No greater cup-tie gift was ever declined than the goal that McNaughton offered Coats just before half time.

Ther was the Dundee centre with a dead ball in front of a yawning goal. McClory, with arms and legs spread, hoping the ball would hit some part of him. Coats could have scored in a dozen different ways. He shot tamely against a post, and the ball was scrambled clear.

What a miss! And what a relief for Motherwell! That next to Ferrier's goal, was the most hair-raising moment in a match that was packed with thrills.

Let me tell you now of the super heroes of a Motherwell team that stood up to as heavy a gruelling as any side is likely to have in the cup.

Number one comes Blair, the man who bottled up Dundee time after time when all seemed lost. For coolness and daring the centre-half stood alone. He held the key to the game by the way he mastered Coats. In the air and on the ground he was an inspiration to a side that often needed one.

Then there was Ben Ellis, injured three times, and simply tearing himself away from his trainer to get back into the battle. Ellis played the flying Robertson in the right way. He angled him out of position instead of darting into the tackle. But even Ellis could not stop the right-winger in the second half, when Robertson ran through and thundered a great shot at McClory, who fisted it away brilliantly.

Only the fates saved Motherwell when the outside-right hit the bottom of the cross bar with a close-range header.

It was then I thought Dundee should have exploited their left-wing more. Kirby had Allan worried. The right back was never too sure. But out would go the ball to the other wing. where, for the most part, it was running up against a brick wall.

Dundee's strange policy of changing three positions because one man, Blyth, was unable to play was revealed as a tactical mistake. It is true that Guthrie was an outstanding success as a half-back. He was a great forager and prompter, but his height and weight were missed in front, where the lack of strength in the inside positions was always obvious, well McNaughton played in spells.

Motherwell missed Stevenson, but his deputy McKenzie scored the vital opening goal with a shot that sneaked inside the post through a crowd of players.

There was more repose in Motherwell's play in the first half, but nothing between the teams in an attacking sense. McMenemy then showed some of his skill, but Ferrier was content to get the ball into the middle first time.

Actually Ogilvie, only recently reinstated into the team, was as likely a forward as any. McFadyen, generally blanketed by Symon, was always a great trier, but he missed one chance that should have put Motherwell two goals ahead before half-time.

That might have been a serious blunder, for Dundee squared the account when Coats passed out to Kirby and McNaughton hit the cross into the net.

But Ferrier's golden goal had yet to come. Will Dundee ever forget it?