I haven't had such an interesting day out for many months. When I say that, I mean that not only did I appreciate the quality of most of the play in the Dundee game, but I also was delighted with the surroundings and with the many people I met.

The players, for example. My old friend, Alec McNair, introduced me to the Dens Park eleven before the game. Jimmy Brownlie then took me into the Dundee United's dressing room.

I have a habit of endeavouring to size up an athlete first time I meet him. And I felt convinced very early that the Dundee fellows were physically superior to the United boys.

The incidents of the game justified me in that opinion. All the time I could see that Dundee had the punch in attack and the strength in defence.

Strength without craft, however, is not sufficient ever in football or in boxing. Fortunately for the Dens Park men, they had both power and ability.

That they deserved to win there can be no doubt. They clouted the United to some tune in the first half, and put them down for the count very effectively in the second. Yet there was a time when I thought the Tannadice team had it in them to make a better fight

That was in the middle of the first half. Previously Campbell, Dundee's centre, had very smartly beaten Paterson after a shot from Townrow had been stopped by the goalkeeper. Then the United went into the fight with any amount of pluck. Had there been a steadying head in the front line anything could have happened, for about this period Brown and Napper Thomson seemed anything but confident.

But the best the forwards could do was to get close enough to goal to allow big Simpson, the centre, to have a pop. The whistle went for a foul before Simpsons shot was in the net.

I'd like to have seen him get the point. for he was the live wire of the attack a trier all the time, and a plucky one at that.

Campbell, however, was not content with one goal. He came, and came again. The man who is determined to try and try again until he does something really big deserves to win the laurels in any sport.

Campbell had a great afternoon. He scored a neat second goal before the interval. He dashed away like a hare soon after the restart, and got another. thought Paterson should have come out of his goal as the centre was rushing in. At anyrate, judging by the success of the keeper's running out tactics on many ocassions, the United 'keeper had a chance that he didn't have when Campbell fired an oblique shot low past him into the net.

Campbell capped a great afternoon's work when he put on Dundee's fifth goal after Meagher had scored the fourth.

I congratulate the Dens Park centre, and I reckon my old pal - Joe Cassidy - whom I met at the Park - will have to be in great form to be better than Campbell.

The game kept me interested all the time. It is natural to expect a fine rivalry between the local teams. The crowd were very excited at times, and I thought the United had much of the sympathy of the spectators.

But United are not a good team. There is no artistry about their play. The halves and forwards don't blend, for one thing, and the backs as a pair are not up to the standard of Brown and Thomson. I fear Jimmy Brownlie will have an anxious time till improvement appears.

I much prefer Marsh to Paterson, though I understood that when on his game the big fellow from Fife is a great 'keeper. What hands he has! I really was tickled to see him stoop and pick up the ball between his fingers almost.

Gilroy is the better of the backs. He, however, seems to be too easily brushed aside by Campbell, the lighter man, and Kaye's defect is lack of recovery power. He kicked a good ball. But he could make very little of wee Cook, as elusive a forward as I have seen for some time.

I was not greatly struck with the United's half-back line. They aren't a patch on the opposition three. Walker, the pivot, is a hard grafter, but neither Bauld nor Campbell has the power to stop forwards who play with both body and brain.

As I have said, Simpson was on his own in the front line. His best position, I was told, is at inside. I can believe it. He is a trifle clumsy in his movements, not quick enough of his mark.

McGregor, a very small outside right, would be a really good one with a bit more weight. Hart and Welsh were devious in their movements. I like to see a bit of 'cuteness in an inside forward. McDonald was never in the picture at all, unless you can call being crowded out that. Ross had his measure most of the time.

The Dundee defence I have dealt with. The half-back line I must describe as A1. Indeed, it contained the best defender on the field, J. Thomson, on the left.

This is a smart fellow, and strong, as are Ross and Rankin, and they're no weaklings, believe me. Big Rankin's head would be a nasty thing to have to punch. It seems hard as iron.

I must praise the Dundee forward line. Every man was a star. Meagher, in particular, is the type wanted in Scottish football. This lad has not been long with Dundee, but I'll be surprised if he doesn't develop into a top-notcher.

Cook, a great favourite, amused me. He is a great bit of good packed into small bulk. Campbell you know about. Townrow and McGinn played as if they had played together for years. The brightest bits of play came from this pair. They passed and repassed in a way that could not be excelled, Yes, a smart lot are the Dundee fellows, just the kind to pull off the Scottish Cup this season. 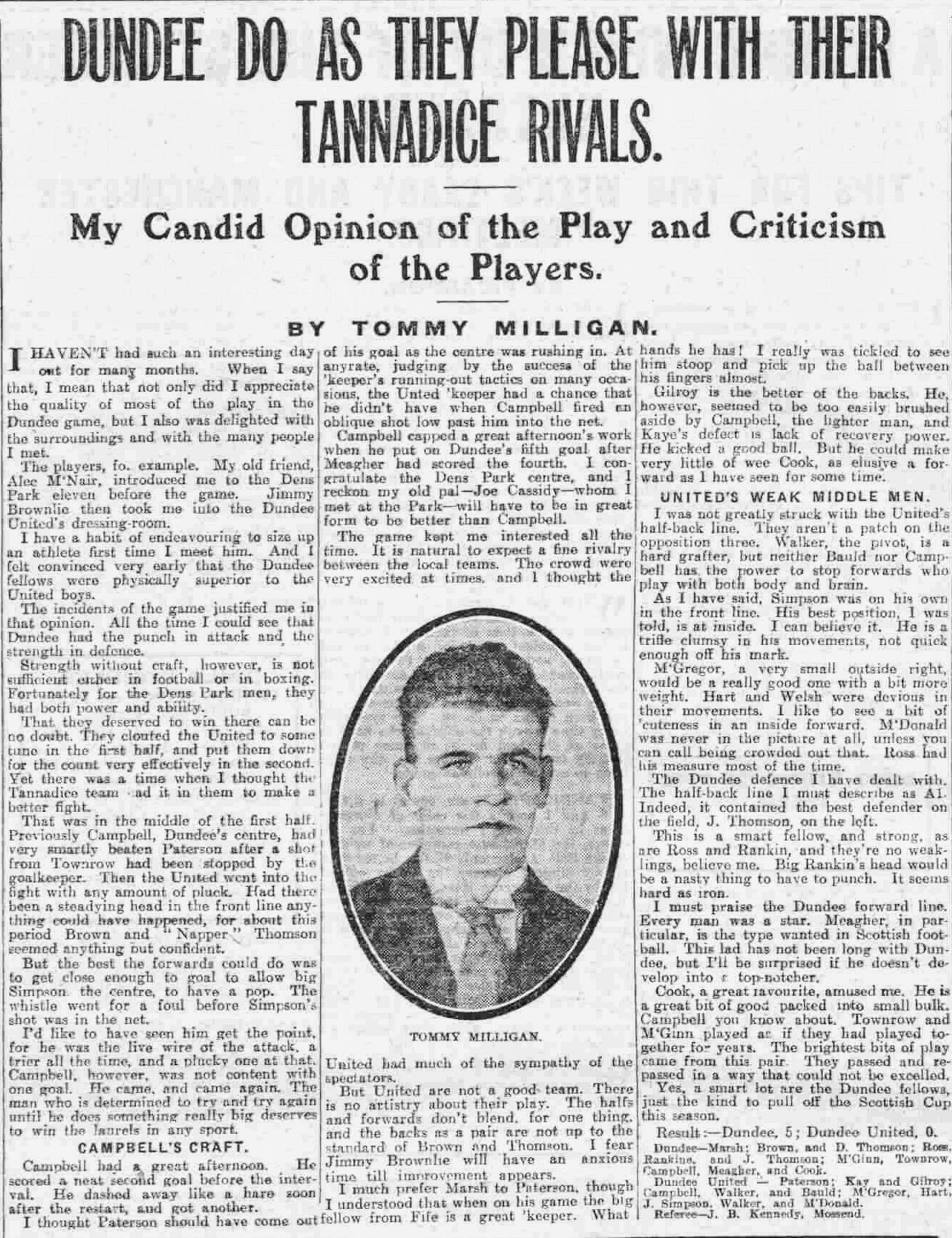