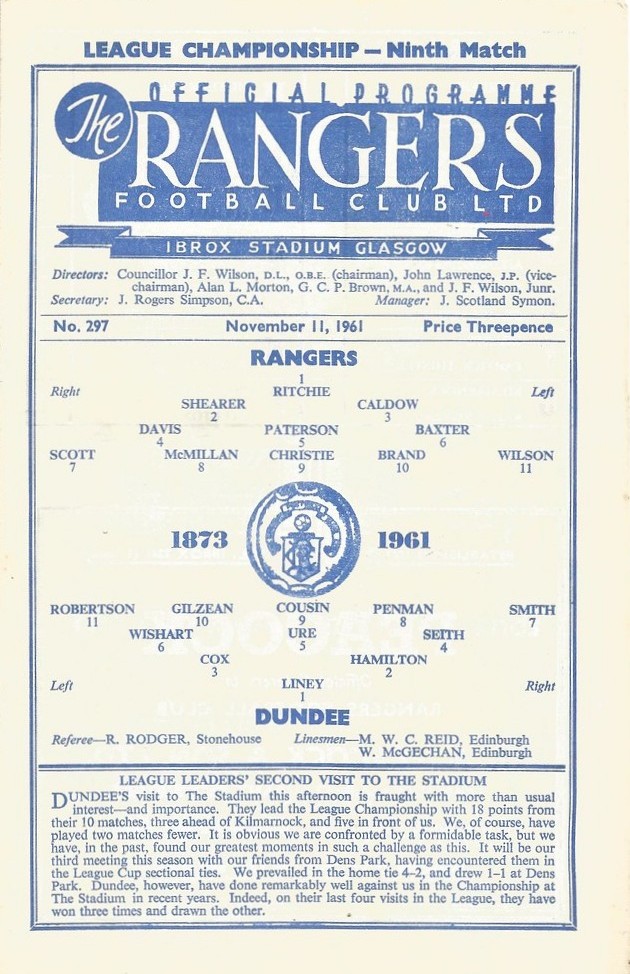 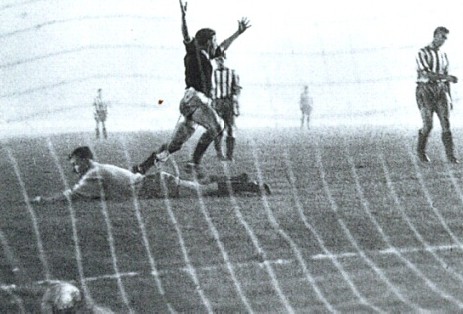 Fan me with Aunt Fanny's feather-boa. It really happened. Rangers flustered, floundered, and flattened, for the first time in a competitive game this season - and by sheer soccer elegance. Gasp at the result, if you will But, believe me, the manner of it would have made you gulp.

Alan Gilzean hit them with two inside the first three minutes of the second half - and only a blessed blanket of the surrounding fog could have saved Rangers then.

The home fans were stunned as this prancing, cultured Dundee side reduced their idols to wide-eyed, fear-stricken units.

It was incredible. Here were the men of mighty deeds - who could rise from the dead - the Light Blues who could snatch victory from the jaws of defeat. Yet, after that second goal, they didn't have a snowball's chance. Rangers didn't give in - they just had no alternative.

They were out-played, outpaced and out-witted by one of the finest performances of any visiting side on that ground.

This was no fluke I said last week after seeing Dundee beat Celtic, that all their sizzling goal-schemes would one day come off and som? enemy would be annihilated.

Not all of them came off here but enough to stamp Dundee as a precious gift to the Scottish game. And, be it to their credit, many of the Rangers standing stood and paid their tribute as the winners came off.

An unusual sight - but proving the complete resignation of the home fans to the supremacy of a soccer symphony with a bang on the drums every now and again.

Gilzean got four goals to himself. But if ever a victory was a team success this was it. From Liney out to Robertson there wasn't a failure- or even a mediocre performer. They were all good.

Rangers were working the ball. Dundee were making the ball do the work Rangers attackers looked like they were all trying to get through a revolving door at the same time.

One minute after the break, Smith started a move at midfield, gave to Cousin, who saw Penman streaking out to the right wing and sent it there and, when a ball came over. Gilzean was flying into head cleanly past Ritchie, without a Ranger having touched the ball.

Two minutes later, the Terrible Trio again - Cousin to Penman, a half-lob into the running Gilzean's path, for a tip past the out-rushing goalkeeper

It was all so easy. Millar and Brand used to do it. But they never did It at such incredible speed.

The moment a Dundonian collected the ball - even deep in his own area - the creeps must have slithered up Ritchie's back at the other end.

For they could know a mythical Balaclava helmet to bling him from their own doorstep.

Before the half-hour, Gilzean banged home his hat-trick from a Smith corner. At last Brand headed one from a Scott corner.

Then Gordon Smith really came out of his shell. Oozing intelligence, he weaved this way and that until a colleague raced into the clear, then to Robertson, who flicked forward for Gilzean to rocket his fourth past the now bewildered Ritchie.

Two minutes before the end, Penman hammered the last nail home when he picked up a bad pass-back from Baxter to score.

On this form there isn't a team to beat Dundee in Scotland. But soccer's a funny game. And the last laugh goes only to the side that can keep it up. I think Dundee can! As for Rangers, it ain't the end of the world though some will now swear it is.