These teams met at Carolina Port on Saturday before 2000 spectators. Heavy rain had fallen during the early part of the day, and in consequence the ground was soft.

Winning the toss, the ground team, with wind and sun behind them, at once put on the pressure, and within a minute of the start Gilligan opened the scoring for his side with a splendid shot.

Resuming, Dundee again took up the running, and the Dumbarton defence was sorely taxed. Following some smart work in front of Docherty's charge, Dundas scored a second point.

The penalty kick was entrusted to Dundas, who landed the ball safely in the net. Half-time came shortly afterwards with the score standing-Dundee, 3 goals; Dumbarton, 0.

On changing ends Dundee again took up the pressure, and several hard shots were sent into Docherty, all of which were successfully negotiated.

The strangers worked their way eastward, and the left wing, outwitting Darroch, Sanderson beat Barrett with a swift low shot.

Dundee again forced the pace, and a clever run ended in another goal being added. Give and take play followed, but at the close the scores were unchanged:- Dundee, 4 goals ; Dumbarton, 1. 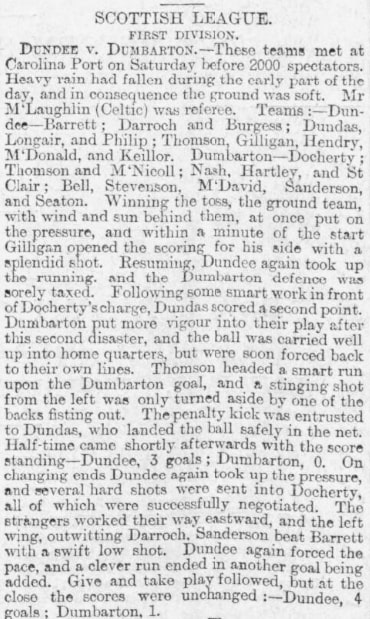